Chris is a member of a Signal Regiment of the armed forces. Chris' story began early June 2019 where he had been feeling under the weather for a week or so, describing it as flu-type symptoms.

On 23 June 2019, he had confined himself to bed and could not even stand up. His parents phoned Chris and convinced him to contact his medics. The following morning the medic saw Chris and phoned an ambulance immediately, on the local hospital's checks he was sent by blue light ambulance to the Queen Elizabeth Hospital Birmingham.

Upon arrival, Chris was diagnosed with a very aggressive infection affecting his heart and vital organs. This infection had gotten into his bloodstream. Chris’ parents Dave and Gill were contacted by an Army Welfare Officer and told them to drop everything and travel from Manchester all the way to Birmingham.

Dave said: “The Army Welfare Officer informed us he had arranged accommodation and to meet him at Fisher House. At this stage we were not too keen on Army accommodation having visited a few barracks, but how very wrong we were! On the way to Birmingham, we received another call from a doctor explaining Chris’s condition was now very critical. We arrived at Fisher House around midnight shocked, worried and tired.”

Dave and Gill were greeted by Army Welfare Officers and Fisher House Management. Gill said: “They were all fantastic and professional they knew of Chris' condition and all were well briefed. They kept us calm and told us they would take us to be with Chris in minutes and left us assured anything we required they would take care of.”
Chris’ condition was critical and required immediate heart surgery, he was to have a heart valve replaced, one valve repaired, a suspected hole in his heart repaired and the infection scraped off his heart linings. His family were informed that he had a 25% chance of surviving the operation. After nine hours in surgery, numerous blood transfusions and dialysis Chris was out of surgery.

Due to Chris being fit and young, he made a miraculous recovery. Chris was in the Critical Care Unit for just two days before moving onto a heart surgery ward where he spent 14 weeks on strong antibiotics and awaiting a pacemaker.

During this period, Dave and Gill began their 14 week stay in Fisher House. Dave said: “The first week was difficult for obvious reasons, worried sick about his recovery and his future but we soon learned staff were very supportive. The hub of the house is the large kitchen (where we shared both laughter and tears) we were able to cook Chris's favourite foods and take them to the hospital, which is only a 10-minute walk away.
“We also cooked and shared meals with the other residents or if you were not feeling like talking/ having had a bad day with loved ones, you can retire to your room, all very comfortable and with Sky TV. During our stay it was summer so spent a lot of time outdoors on the lovely patio area, even having a barbecue one evening! Our other son and his family were able to stay at the house on a couple of weekends and spend time with Chris. We met, and are still in touch with two other families and often played with other families children taking our minds off the worries about Chris.

“In summary, Fisher House was a godsend, not just the financial savings but it really felt like a home from home, we have nothing but happy memories of our stay, even though we encountered tragic stories, we felt cushioned due to the empathy of both staff and other residents.
Fisher House is now in our hearts, we donate a small amount monthly and dream of maybe a lottery win, to be able to donate a more substantial amount, it is now our favourite charity, that's the effect the stay has on us.
Our outstanding memory was just before Chris was discharged from hospital, he was allowed off the ward to visit Fisher House, where a few of his best friends also visited. They all went upstairs to the TV room, watched football and chatted over pizza and a few beers and had a good laugh. We cannot think of another place like Fisher House it is truly unique in what it gives, nobody wants to be there as it is normally upsetting circumstances but there is no better place to be. 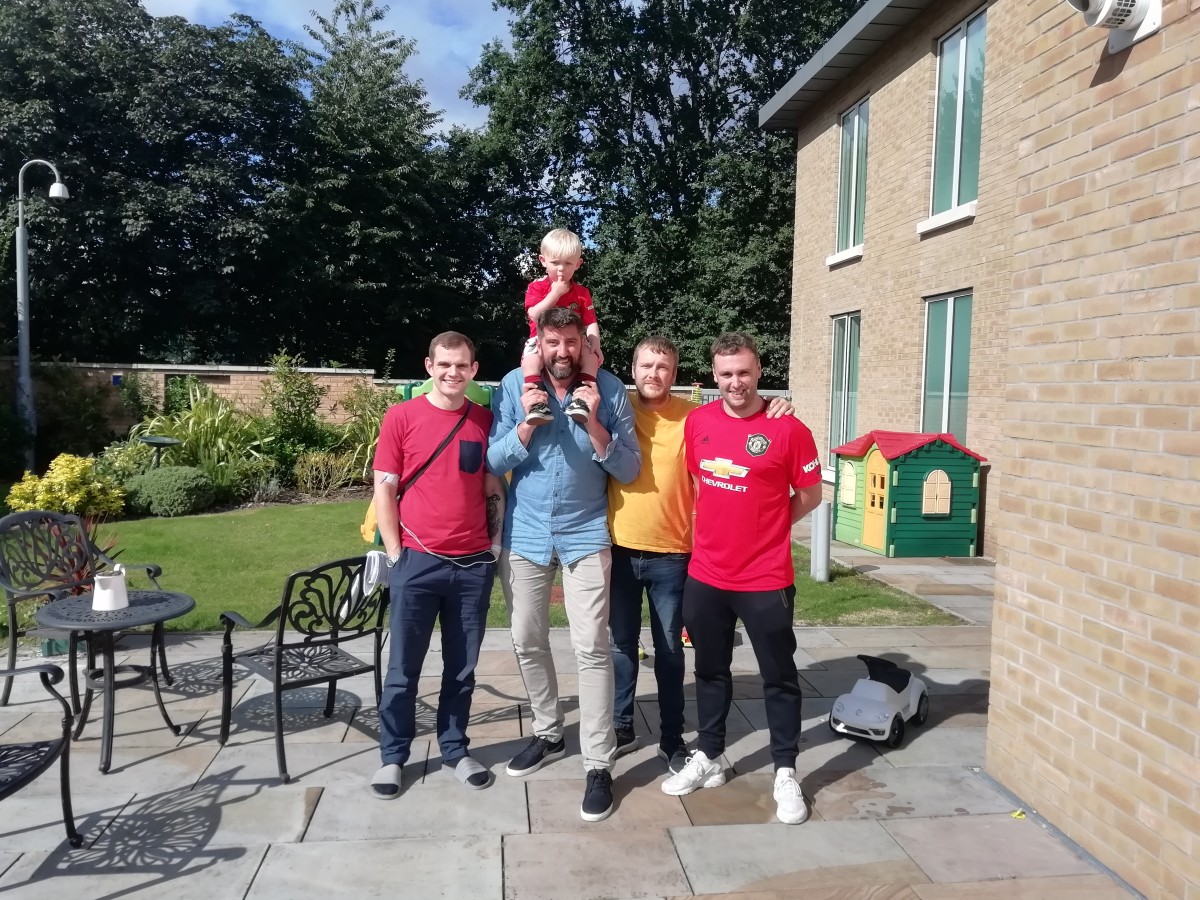 Chris has stayed at Fisher House due to outpatients appointments at the hospital and no doubt stay there again on his road to a full recovery.