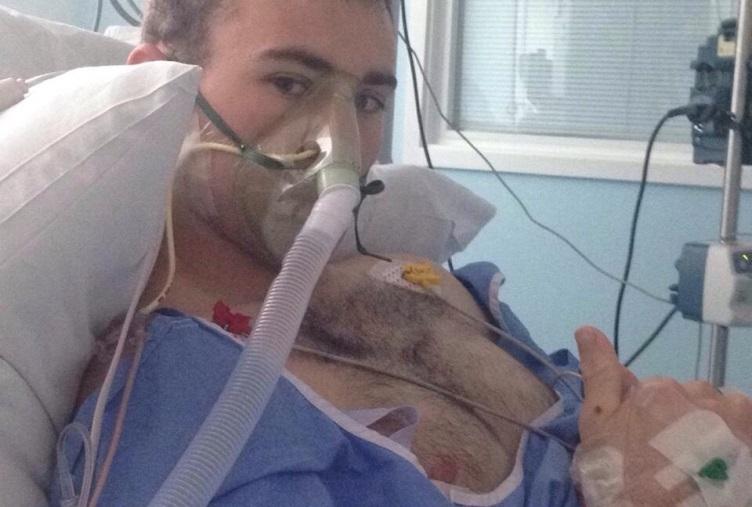 On 1 August 2014, Harry Pooley was just four months into his eight month Royal Navy deployment to the Persian Gulf when he was critically injured whilst jet-skiing. Suffering multiple internal injuries, he was rushed to a Bahrain hospital’s Intensive Care Unit until he was stable enough to be transported back to Britain for treatment.

It took a week for Harry’s condition to stabilise enough for him to be moved and a medical repatriation arranged. In the meantime his ship had set sail, while his family were waiting anxiously at home in Cornwall, England.

Finally Harry was able to be taken back to his home country and reunited with his family. A Medevac flight returned him to the Queen Elizabeth Hospital Birmingham, the receiving hospital for all UK military patients, where he spent a further two weeks in the Critical Care Unit followed by a week on the liver ward, as he required surgery.

For the duration of the care Harry received for his substantial internal injuries, his parents, brothers and partner were able to stay at Fisher House; a valuable asset to them considering the long journey from Cornwall.

Harry said: “Fisher House is a beautiful home from home, everything is provided. Support, advice and information are always on hand, whatever time of the day or night.  The staff are amazing, nothing is too much trouble and they do their utmost to accommodate your needs.

“Fisher House is a short walk from the main hospital so if there is a problem your family can be with you quickly and do not need to worry about parking or travel. There may be several families there at any one time and my parents were comforted by the mutual empathy and support. I have stayed there myself a few nights, once when I was initially discharged and it was too late to travel and a couple of times in the last year when I returned to QE for check-ups.”

Harry has spent the past year in a Help for Heroes Recovery Centre in Plymouth, and hopes to return to Royal Navy service as soon as he can. He and his family have signed up to become Friends of Fisher House, meaning they give a donation every month in order to make sure other families can continue to benefit from the 18-bedroom, charity-funded ‘home away from home’.

Harry added:  “I would say that we all hope never to have need of Fisher House, but if we do then there is no other place we would rather be.”