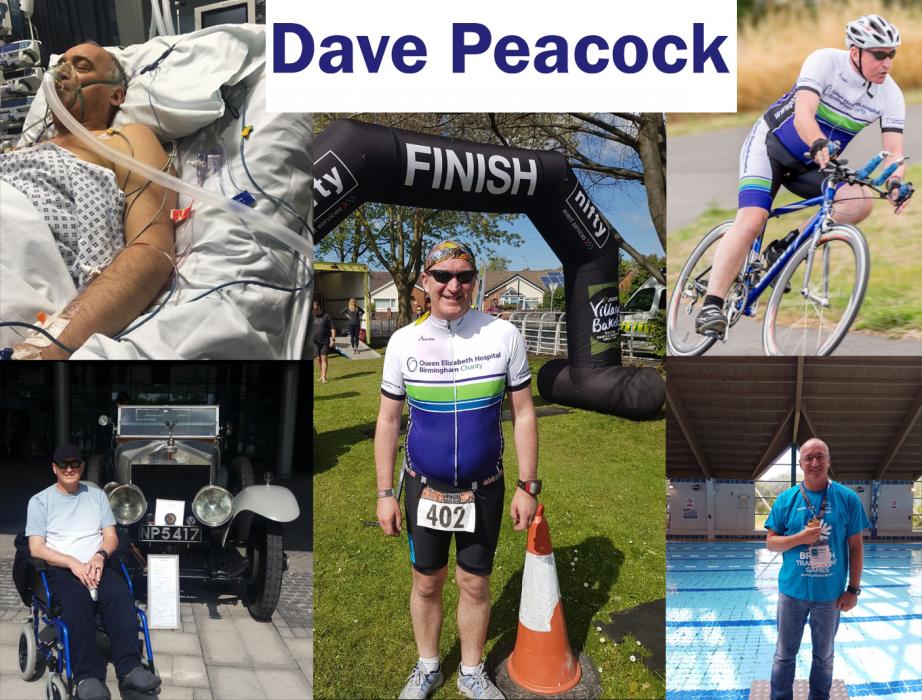 Liver transplant recipient, Dave Peacock, tells his story in his own words.

I first started to feel unwell in the middle of January 2016, after having a touch of flu. Following this, I started gradually going off my food, indeed the day before I went to see my GP I was sick whilst putting food on a plate. My GP sent me for blood tests at 10:30am and I received a call to go to hospital at 2:30pm. This was the start of my rapid decline from a healthy individual who had completed three ironman triathlons, to a man who could only manage 20 metres’ walking before needing to stop, all in the space of a few weeks.

I was admitted to my local hospital in Warrington for tests and every few days the expected time to recover seemed to double, from a few weeks to a few months, to a year or more.

Eventually, it was decided that I needed more specialist care, so I was transferred to the Queen Elizabeth Hospital Birmingham. My fiancée travelled down and stayed in the relatives’ accommodation within the hospital grounds. After several weeks it was obvious that my liver would not recover on its own and without a transplant I would die.

At this point I asked the hospital would it be possible to marry my fiancée in the hospital as I was too unwell to leave the hospital even briefly. This wish was granted, and we arranged the wedding in a matter of hours with two days’ notice and a great deal of help from the hospital staff, family and friends. I am pleased to say that most of both families and several close friends were present despite the short notice and distances involved some coming from London and some from Edinburgh.

On the day we got married, 6 May 2016, just before I was taken down to the wedding in a wheelchair I was informed that I had been placed on the urgent transplant list.

Having suspected for a while that I would need a transplant, and knowing it was a major operation lasting around an expected eight hours, I had to improve my physical health before the procedure. With the help of the hospital, I improved my physical condition mainly by walking, pushing myself daily to walk an extra ten metres at a time, yes sometimes overdoing it and getting back to my bed absolutely shattered and sleeping for an hour or more.

I knew in my mind I had to give myself the best chance of a good outcome and getting myself in the best physical shape would ultimately aid my recovery from the surgery. By the time of my transplant I had built myself up to walking for 10 minutes and managing to climb two floors of stairs.

During my time in hospital before the transplant I experienced some of the many various side effects of liver failure including severe itching, and encephalopathy where toxins build up in the brain. This caused me to lose track of time including feeling time was very slow and on another occasion being extremely tired and believing that the nurses were waiting around the corner and every time I shut my eyes they would come in and wake me up. They had placed me on hourly observations so were waking me every hour to check I was ok.

I was fortunate to be given a transplant on 17 May 2016 and amazed the doctors and nursing staff by responding so well to the transplant and recovering from the six-and-a-half-hour operation that I was brought round from an induced coma after only a few hours instead of the normal two days.

I was discharged from hospital nine days after my transplant after receiving amazing care by all the hospital staff from the porters, nursing staff, doctors, surgeons, physios, dieticians and not forgetting the cleaning staff. Despite a brief return to hospital due to an infection for three weeks I have only returned for regular outpatients appointments.

Following all the tests currently available and after the transplant it was confirmed that my liver had failed due to Seronegative hepatitis, in other words they do not know what caused it to fail. All they could tell me was that they get a couple of cases a year where they cannot find a cause and believe it could be a virus or an autoimmune condition where the body attacks itself.

Just over two years from my transplant I again competed in the transplant games however as there was no triathlon I competed in swimming, cycling, running and ten pin bowling. I also entered and completed an Olympic triathlon in the September.

During my period in hospital whilst being assessed for a transplant I met one of the coordinators who is also a triathlete and she spotted my ironman tattoo on my calf. She informed me that there was no reason why I couldn’t compete in triathlons again after my transplant. With this information I set myself the challenge of completing another ironman triathlon which will be my fourth.

So, this year just over three years after my transplant I will be competing in Ironman UK in Bolton on 14 July both with the aims of raising fund for the Queen Elizabeth Hospital Birmingham Charity and to raise awareness of the benefits of organ donation. I also hope as part of this and the publicity I hope it generates, gets people talking with their families about their wishes regarding organ donation.

Without my donor’s family who are always in my thoughts, making the decision at what is a very difficult time for any family. As I am aware having lost my own father just seven months before my own transplant. I and many other transplant recipients would not be competing at the transplant games, or indeed many other events we would not even be alive. As we all say without our heroes (donors) and their brave families all of this would not be possible.

So, if I could ask one thing it would be please join the organ donor register and as importantly have a conversation with your family.