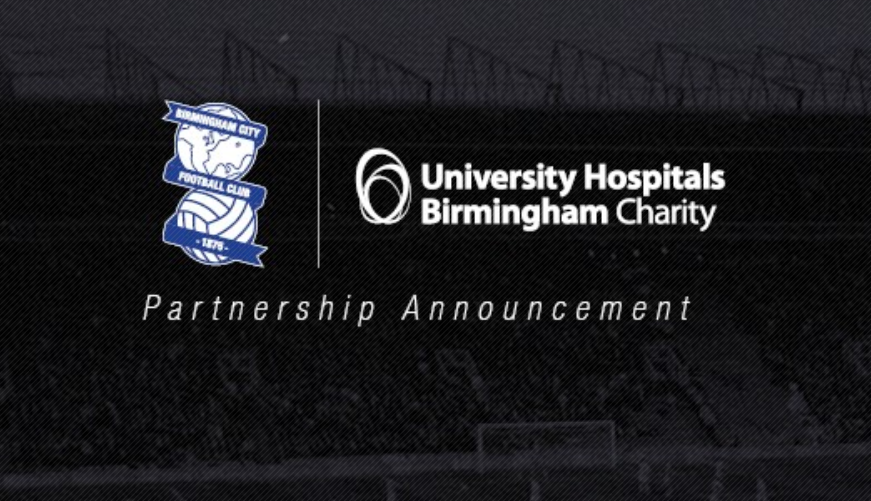 University Hospitals Birmingham (UHB) Charity is incredibly excited to announce that Birmingham City FC has extended their official Charity Partnership with the charity for 2021/22.

Blues have worked with UHB Charity since Covid-19 hit, raising tens of thousands of pounds across regular events, auctions and donations. Junior fans will also have had UHB branding adorned across the front of their 2020/21 shirts.

But with a lack of fans, hospitality and networking events, Blues have decided to renew the partnership for another season, aiming to further support the charity in new and creative ways.
Amongst many other good causes, money raised by the Club and fans will go towards funding the brand-new £2million Birmingham Transplant Centre, which will be entirely charity funded, as well contributing to Heartlands’ new accessible care facility, the Ambulatory Care and Diagnostics Centre (ACAD).

Ian Dutton, Chief Commercial Officer at Birmingham City FC, said: “We’ve worked with University Hospitals Birmingham Charity from the start of the pandemic, and our players, staff and fans are incredibly proud of what we’ve already achieved for the local NHS trust.

It was an easy decision to carry on working with the charity. The work they do affects everyone in the city, so when fans donate to our campaigns, they get the benefit of the funding themselves. We’ve got some really exciting plans in place and we’re all looking forward to working with the team again.”

The club kicked off their fundraising, with an exclusive raffle, giving blues supporters to chance to win six exclusive prizes across the men's and women's teams.

Charlotte Schofield, Fundraising Manager at UHB Charity, said: “We are so grateful that Birmingham City Football Club have renewed their charity partnership with us for 2021/22. It has been an incredibly tough year for University Hospitals Birmingham (UHB) trust, and UHB Charity have been doing all we can to support our staff, patients and families. We cannot support our hospitals without the support of our local communities, such as Birmingham City FC. On behalf of all the staff and patients across our Trust, UHB Charity  would like to say a huge thank you to Birmingham City FC for everything that they have done to support since the outbreak of the pandemic.  Blues raised an incredible amount for us last year, despite the restrictions, and we are so excited to see what the next year will bring!”

You can buy your raffle tickets here.

Keep your eyes peeled on both ours and Blues’ social media platforms to find out more about their fundraising events throughout 2021/22.