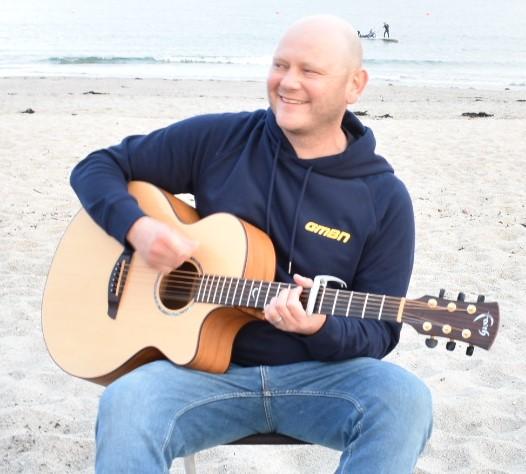 Corrie Walker is a patient at the Queen Elizabeth Hospital who is currently battling stage four cancer. As an avid fundraiser for UHB Charity he has previously cycled an incredible 300 miles, and is now tapping into his musical talents by releasing a Charity single and performing a gig on the evening of 29th April at Tamworth Snowdome to release the single.

As a way of saying thank you for the wonderful care he received at the Queen Elizabeth over the years, he is releasing the original single “Thank you” as a way to show his appreciation for the doctors and nurses who provided such excellent care, as well as the support from friends and family. This single was written by Corrie and his band, Legends of Indie, and they are joined by Bev Bevan and Abby Brant, with the track having been produced by Alan Caves. Legends of Indie will be playing a plethora of classic indie rock covers throughout the evening, as well as debuting their brand new single “Thank you”.

The money Corrie is raising will be split between Cancer Research and University Hospitals Birmingham Charity. The amount raised for the Queen Elizabeth Hospital will go towards the new Oncology Treatment Suite, which will ensure the patient journey is as comfortable as possible and that patients are put at ease whilst receiving treatment.

Corrie has received treatment for various things at the Queen Elizabeth Hospital over the years, including a bone marrow transplant, graft versus host disease, meningitis, two hip replacements and he has now been battling stage four cancer since November 2018. This has seen him undergo 40 rounds of chemotherapy, alongside numerous operations. The disease is now confined to his lungs where he has numerous tumours which had become chemotherapy-resistant. Left untreated these could have caused significant problems and could have increased the chance of the cancer spreading to other areas, so he undertook targeted radiotherapy (stereotactic ablative radiotherapy, SABR)  to remove these.

Being diagnosed with cancer Corrie expressed was “one of the most challenging times of my life both physically and mentally. Dealing with the shock and initial diagnosis was hard but I have always tried to stay positive. I think it is my positivity that has help me already outlive the dire prognosis of 16 months.

“My operation was the most physically challenging thing I have ever been through; sickness and severe pain for an extended period was not easy. Thankfully I think the operation was a success and definitely the right thing to do. I have also now completed my SABR treatment. Thanks to friends, family and even people I have never met over £31,000 was raised to fund this. I am so grateful for people’s kindness. The SABR has worked well on the four largest tumours in my lungs and I’m confident that it has given me a huge advantage on continuing to fight my battle for many more years to come.”

Corrie has now restarted chemotherapy and is doing “everything I can to fight this”.

Corrie’s wife, Angela, told us, “We have been very lucky to have had a lot of support off our friends and family; people's kindness has been overwhelming at times. Over the last three years we have had so many ups and downs. We constantly have a cloud of uncertainly hanging over us but we have learnt to manage it, mainly because of our daughter! Ellie is now six and accepts that daddy has to go to the Queen Elizabeth a lot. It also helps that Corrie is amazing and has kept his sense of humour. He has been an inspiration to me and Ellie.”

If you would like to join Corrie in supporting the Queen Elizabeth Cancer Appeal, then Legends of Indie would love for you to join them at 7pm on 29th April in the Tirol Suite at the Tamworth Snowdome. Some tickets may be available on the door, but be sure to book online now to avoid disappointment, here. The single will be released the same day and will be available on a range of platforms, but you can pre-order it on Amazon Music now here.