Double lung transplant patient gives back to hospital that saved him 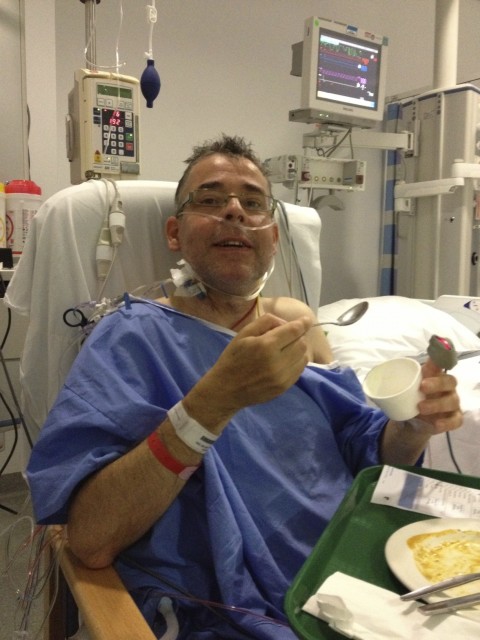 A lung transplant patient is raising money to give back to the Queen Elizabeth Hospital Birmingham after undergoing a life-saving operation.

After suffering from Cystic Fibrosis since birth, Dom was put on the transplant list as his symptoms worsened.

He said: “I was permanently tired, barely had the energy to eat and struggled to clear my lungs of the infection. I regularly needed antibiotics to suppress further infection, inflammation and slow down deterioration. Poor gas exchange in my damaged lungs made it difficult to function and my head felt like a medicine ball.

“I am the second in my family to have a double lung transplant due to damage caused by Cystic Fibrosis and three of my siblings also had the disease. My eldest brother, Matthew, had a double lung transplant in his early 30s, but has sadly since died. My twin brothers Anthony and Charlie died a couple of months after birth from Cystic Fibrosis back in the early 1960s.”

In July 2014 Dom underwent the life-saving nine hour operation, and now wants to give back to the hospital that saved him.

The 48 year old, joined by 14 friends, climbed Mount Snowdon in July to mark the one year anniversary since undergoing the successful transplant, and managed to raise a whopping £660 for QEHB Charity in the process.

Snowdon- Dom He said: “I wanted to give back to service at the QE as a way of thanking them for saving my life. As terrible as the symptoms were and as grueling as the treatment was, I know I’m lucky to be alive. It was a different story for my family so I am especially grateful to the hospital for giving me a second chance.

“The book displays some of the photography from either side of my lung transplant, and the photos help tell the story about my life with Cystic Fibrosis and my path to a lung transplant.”

Michael Tivey, Fundraising Officer at QEHB Charity, said: “We are incredibly humbled by Dom’s story and thank him for his generous support of the Charity.

“The money kindly donated to the Charity will support patient care amongst patients on the transplant list, and those who are receiving patient care post-transplant at the QE.”

To order a copy of Dom’s coffee table book, please email Dom at leprechaundom@yahoo.com, or click here to purchase the book via the ‘gallery’ section of the website.