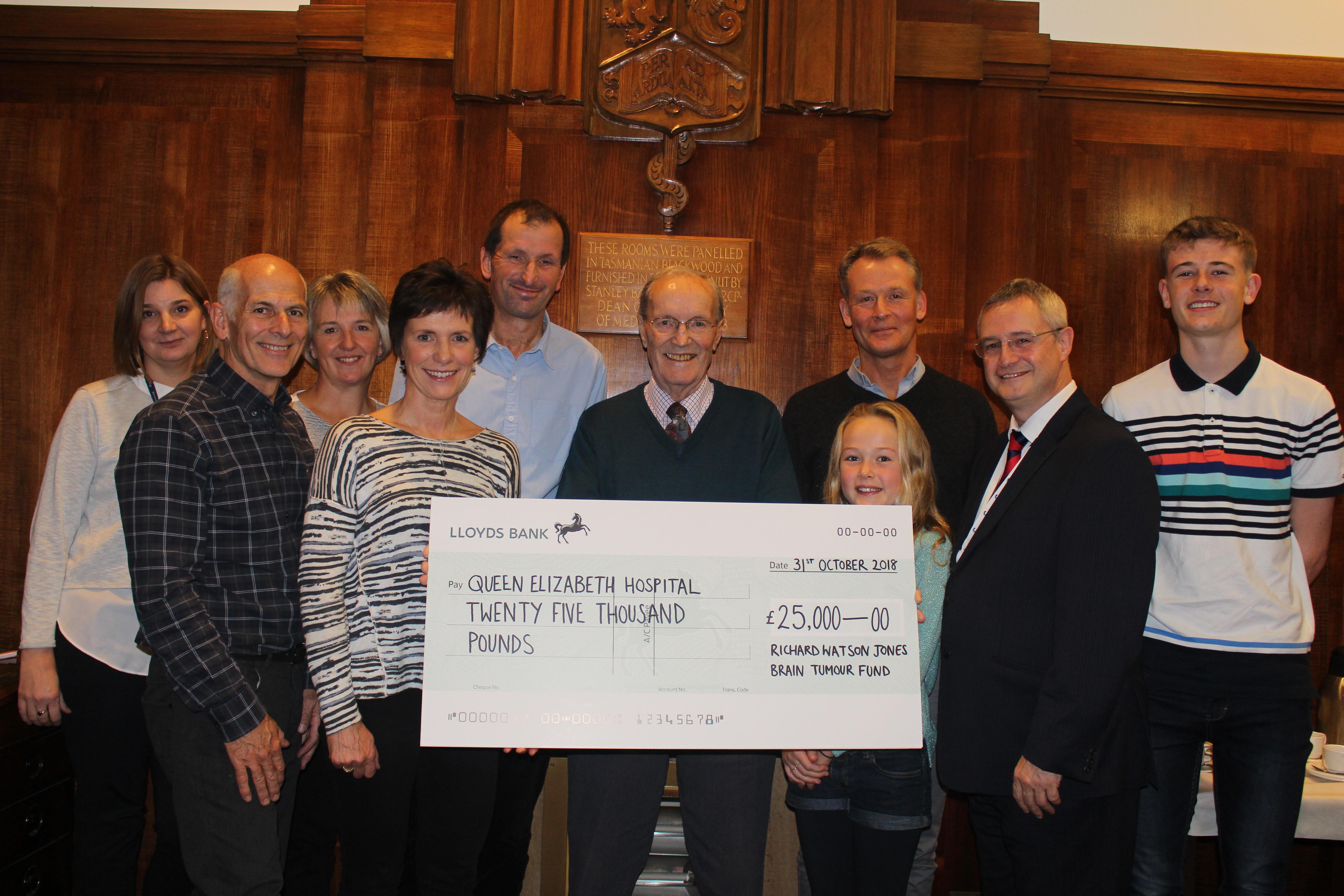 A group of friends and family have presented a cheque to the Queen Elizabeth Hospital Birmingham Charity for an incredible £25,000, in memory of Richard Watson Jones, which will support the world-class care on offer for brain tumour patients at the hospital.

Richard was just 37 years old when he went on holiday to Portugal with his wife Helen, and children Katie and Jonathan, back in July 2000. Richard had felt slightly unwell in the run-up to the holiday, and received eye-tests after frequent headaches. However, nothing indicated that there was anything to be concerned about.

Tragically, Richard never returned from holiday. His health rapidly deteriorated and scans showed that he had been living with a brain tumour. An incredibly popular man, and the youngest Vice-President of the National Farmers’ Union, 700 people paid their respects at Richard’s funeral including the Minister of Agriculture.

As a close friend since childhood, David Briggs was determined to do something to create a lasting legacy for Richard. David said: “Richard was a fantastic character, a great bloke, and he was destined for great things. Eighteen months after he passed away, I wanted to try and mark Richard’s life in a lasting way.”

David organised a golf day in 2002 at Market Drayton golf club, which was a brilliant success and attracted over 200 golf players who came together to enjoy a day of golf and fundraising.

Sixteen years on, the golf day has become an annual fixture with friends and family coming together to remember Richard’s life and raise money for patients at the Queen Elizabeth Hospital Birmingham.

Over the years, Professor Garth Cruickshank became an important supporter of the golf day, coming along regularly to explain where the money they had raised was being spent.

David recently made the trip to QEHB alongside Richard’s family to present a cheque to the Charity for £25,000. This donation means that the team have raised an astonishing £90,000 since the first golf day back in 2002.

Professor Colin Watts, whose has succeeded Professor Cruickshank, spoke to the family about the difference that their donations has made to brain tumour patients at the hospital over the years, and the continuing impact that their fundraising will make.

Cathryn Worth, Fundraising Manager at QEHB Charity, said: “It was a pleasure to meet David, and Richard’s family, and learn more about Richard’s life and legacy. They are incredibly committed fundraisers, and on behalf of everyone at the Charity I would like to thank them for their hard work over so many years to raise such a wonderful amount of money.

“The Charity is proud to support the work of Professor Watts and the amazing team who work to treat people with brain tumour here at the hospital. The research that they undertake and the treatment that they are able to offer to patients make the QEHB a truly world-leading hospital.”

David and his friends plan to continue their fundraising efforts long into the future, saying: “I am delighted that the golf day continues to be such a success and we’re all proud to have raised so much money over the years.

“It isn’t just the golf day, the family raise money in many inventive ways, with Richard’s cousin Andrew holding a vintage ploughing match every year! We all look forward to hearing more from Professor Watts in the future as the team continue to make incredible advances in the treatment of brain tumours.”

To find out more about how QEHB Charity supports brain tumour research at the hospital, please click here.