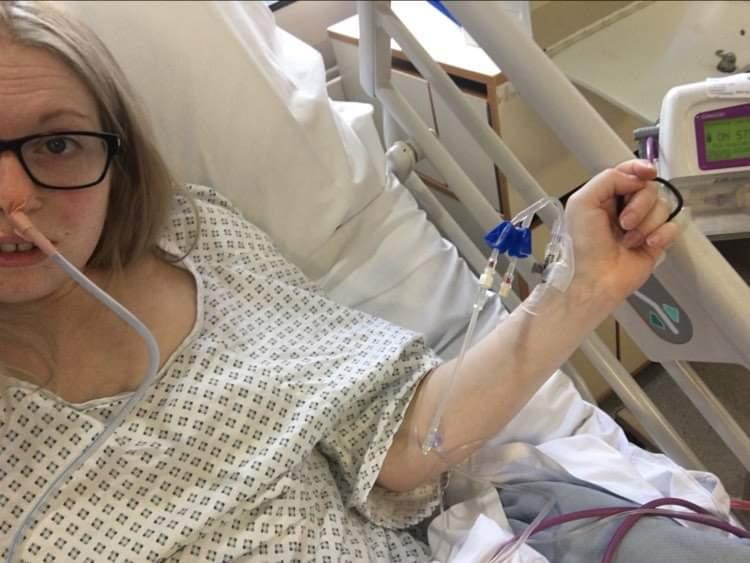 Jessica Mary Logan has launched a project raising awareness of people living with invisible illnesses and disabilities. Now, the former Good Hope Hospital patient is donating money to University Hospitals Birmingham Charity thanks to the merchandise that she has sold.

Jessica wrote the following blog post to explain her story, and the reasons why she wants to make the invisible visible.

In 2017 I became really unwell and ended up in Good Hope hospital fighting for my life, with it becoming my second home in the July and August.

I received a diagnosis of acute severe ulcerative colitis whilst I was admitted and received a number of treatments.

Unfortunately these treatments were not improving my symptoms so I was told in the same week as diagnosis that I would need emergency stoma surgery.

I was in complete shock and struggled to process it all, but I was made to feel at ease by my surgeon Mr Fallis, The IBD team and the stoma nurses.

I was given the weekend to take everything in and held onto hope that things might improve in this time. Come Monday it was agreed that surgery was the right option for me, to end my pain and because my bowel could perforate at anytime.

My stoma surgery successfully went ahead the following day however I ended up suffering with complications, which began the day before discharge. I was then in and out of hospital until it was decided I would need further emergency surgery, around 3 weeks later. During this surgery they found a twist in my bowel so corrected the issue.

My wound decided to burst open on the day of this discharge but I was able to go home with a drainage bag.
I continued to have complications with my stoma and my rectum so further surgery was planned. My surgeons

Mr Fallis and Mr Ragu allowed me to delay this for our wedding day and mini moon, which we are forever thankful for as it allowed us to enjoy something after such a rocky year with my illness.

My 3rd surgery to create my J-Pouch went ahead in April 2018, which I believe took around 8 hours and my 4th surgery to close my stoma and make use of the pouch was in the July, once it had healed. I suffered with a few complications after these surgeries, which resulted in me being readmitted and having a blood transfusion but it’s something I had got used to.

I was always on Ward 16 where I had built a relationship up with the nurses and this made the experience easier. We used to joke about it being me again, especially as I seemed to always end back in just after discharge.

It was definitely a crazy year. At the beginning of my surgery journey, I was an emotional mess but by the time it came to my 3rd surgery I felt like I was ready to tackle anything.

It’s amazing how strong we can become when we have to be.

If I wasn't admitted into hospital in July 2017 and received the care I did, its possible I may not be here today to tell my story. It could have been too late so that's why I feel it’s important I now give back to Good Hope.

I had to give up my successful career in banking due to me later suffering with chronic fatigue syndrome, which was officially diagnosed in 2019 however I had been struggling to recover after my 4th surgery in July 2018.

I had always been an ambitious and independent person so I found this really hard to accept at first. I was struggling to stay awake and wake up, felt weak all the time and it continued to deteriorate, to the point I'm now unable to get to the toilet sometimes without help.

Despite me having bad days, I couldn't let my illnesses define me so I decided to create something that would help me, but most importantly, help others.

I have always received discrimination since using disabled toilets and at first it made me angry but then I realised a lot of it was due to a lack of education. That’s why I came up with the idea to create an image that symbolises different illnesses and disabilities that someone could have hiding underneath their 'normal' appearance.

These were created last November and were launched into merchandise. At first I sold them at cost price to get the word out but started selling them at a slightly increased price during lockdown, to donate all net profits to charity.

I selected 9 different charities that support those with invisible illnesses and disabilities (unfortunately I can't donate to them all), and University Hospitals Birmingham Charity.

All of my projects and merchandise can be viewed on www.makingtheinvisiblevisible.org.uk.

In February 2020, I launched empowerment photo-shoots to help people overcome the negativity they experience in life. Each person would write words on themselves to represent what they thought, things other people had said or things that linked to their illness or disability.

This helped them release those feelings and believe in themselves with the support of everyone around them.
I planned to turn the shoots into a calendar for invisible illnesses and disabilities, to make them feel accepted for who they are.

Covid cancelled our shoots but it didn't stop me from creating the calendar!

I had people participate from home and a covid safe photoshoot took place in Kent and some people organised their own personal shoots.

It was launched in November and it has already raised nearly £500 through its current sales and reservations. 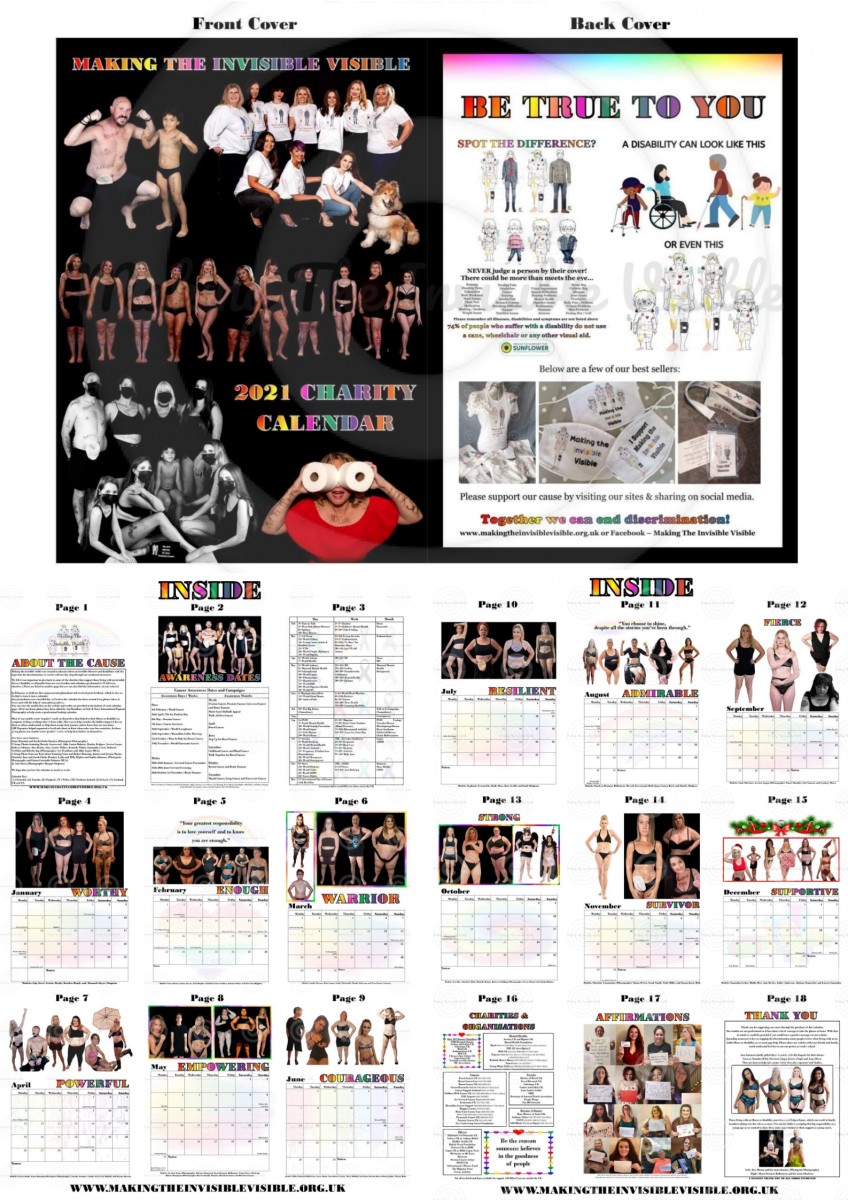 Over 70 people took part in the shoot and the calendar includes additional pages and info that I felt was important e.g. mental health support lines.

The total raised from my merchandise and calendars will be donated to my chosen charities in bulk so that it can help them during this difficult time. (I am just awaiting final payments before I do this.)

The messages I've received from those who took part are heart warming. I'm proud of each and everyone of them because I know how much courage it can take. They've all overcome so much in life and I'm glad this has boosted their confidence.

I struggled to accept my stoma for the first six months as there was no representation of them at the time.

Since my surgery, there has been some change in the fashion industry but I know there is still a long way to go.

I was excited to receive collaboration with Ann Summers who gifted me, and 3 other ladies, underwear for the calendar photos. It helped show that despite the changes to our bodies, we can still be confident and beautiful.

I love that I now help others find acceptance in their journeys and how they look.

I feel this is really important for your own happiness and I'm happy to give back to my community.