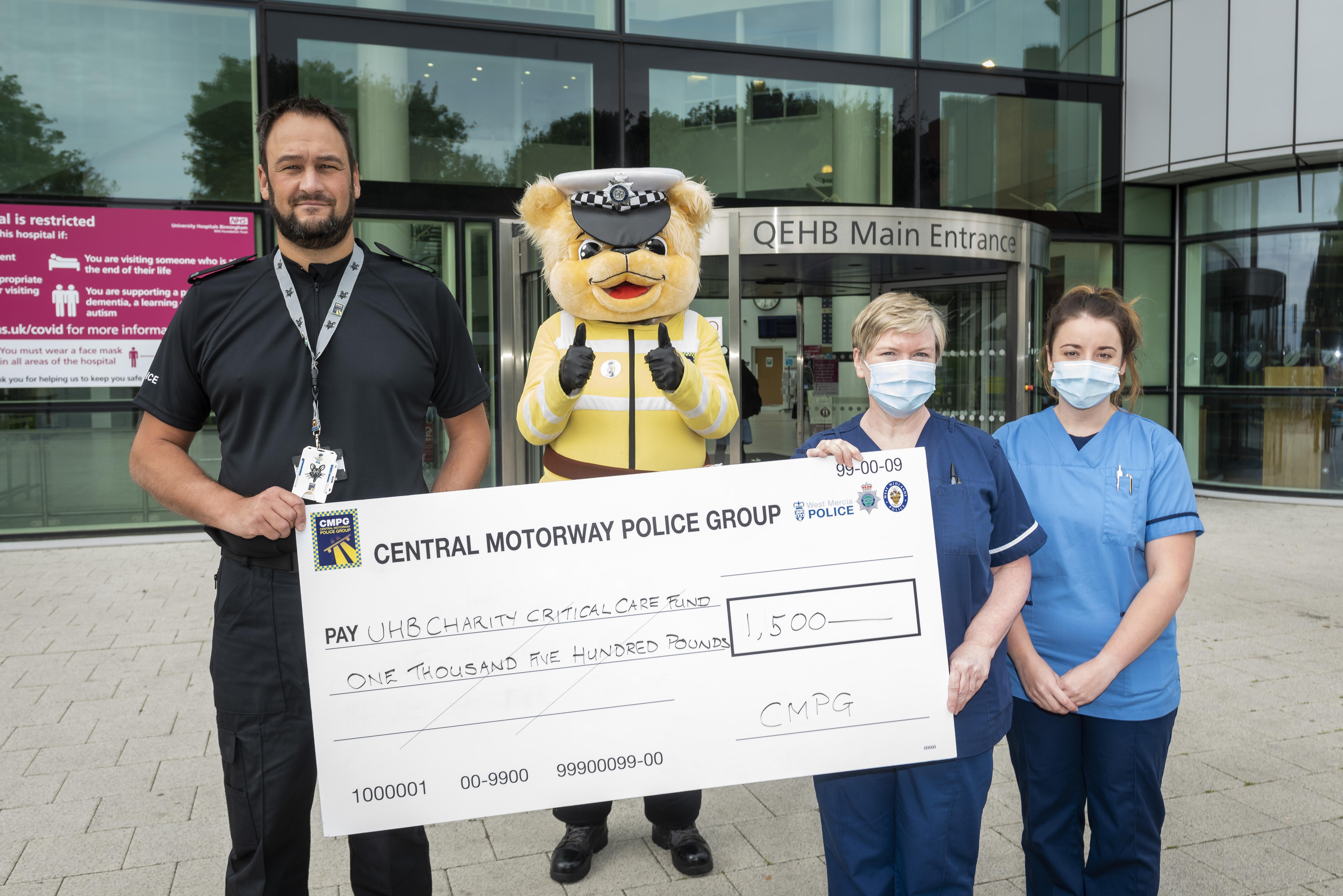 PC Gareth Phillips of the Central Motorway Police Group has raised £1,500 for Critical Care at the Queen Elizabeth Hospital Birmingham following the life-saving treatment that he received on the unit back in 2019.

Gareth was seriously injured in the line-of-duty after he was run over by a thief in a stolen police car and was rushed to the Queen Elizabeth Hospital Birmingham, home to Europe’s largest single-floor critical care unit.

Watch: Gareth Phillips returns to QEHB to hand over cheque.

Gareth spent two weeks in intensive care before being transferred to a trauma ward where he spent another two weeks recovering before returning home. Even whilst he was still in hospital, Gareth decided that he wanted to do something to raise funds for the unit that saved his life.

The Central Motorway Police Group’s mascot, a bear, was originally drawn by children’s book illustrator Peter Scott. Gareth got in touch with Peter whilst he was in hospital and Peter re-drew the mascot, but this time as an injured bear, complete with bandages and crutches.

The new mascot was made into a badge, which Gareth and his colleagues sold to the public and colleagues, helping to raise £1,500 for the Critical Care Department.

Gareth returned to the hospital to present the cheque to University Hospitals Birmingham Charity and sister Ann O’Meara and nurse Hannah Nicholls who treated him during his time on critical care.

Gareth said: “It’s a bit strange [coming back to the hospital], the first time I’ve been here for 12 months where I’ve not been operated on or treated. It’s nice to meet the staff again. Both of these nice ladies looked after me when I was in ITU, and it’s lovely to give the money over to the hospital charity.”

Ann said: “I looked after Gareth when he first came in, so straight after surgery when he was sedated and ventilated, so it was just really great to see him progress. It’s just fabulous to see him today looking so well.

“Any donation is fantastic. It will just mean we can buy stuff that will be beneficial for the patients and the staff and make their stay in hospital a bit easier and a bit nicer. We’re so grateful to the people who donated. It means a lot to the people who work here.”