Rupert runs half marathon in memory of his wife 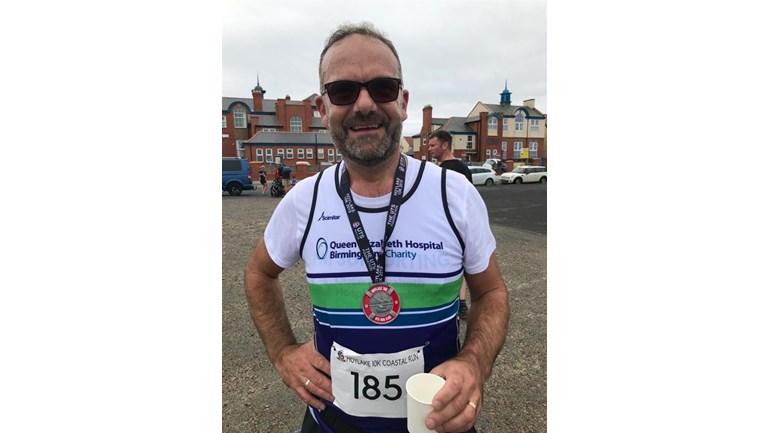 Rupert Hannibal and his family all have a connection to the Queen Elizabeth Hospital Birmingham in some way, and now thanks to the care that they received, he’s giving back by running the SimplyHealth Great Birmingham Run.

In 2015 Rupert lost his wife of 30 years, Sharon, after she was treated at QEHB for bowel cancer, he said: “She was treated very well at the QE, although there was nothing that could be done by the time she came under their care.

“Losing her and becoming widowed was catastrophic in so many ways, not least because I lost who I was. She instructed me not to be sad or alone. She was an extremely insightful and compassionate woman – I am very lucky to have had her in my life.”

To cope with the loss of his late wife Sharon, Rupert went to meditation lessons, yoga and joined a widowers walking group to improve his physical and emotional wellbeing.

He said: “I completely lost my place in this world. I found myself not knowing how to be a dad or a granddad. The yoga and the walking helped me find new friends in a widows support group and helped me face life and give me a purpose.”

Rupert and Sharon fostered 98 children over 22 years so he had a big family to help him out during his time of need.

Rupert has now remarried to Gaynor who he met through the widowers walking group. They were sadly involved in a hit and run incident in 2018 which left them both in the care of QEHB’s trauma team and Gaynor is still treated there now for the injuries that she sustained.

Rupert said: “Gaynor introduced me to running and became my training partner. She gave me the inspiration and confidence to push myself.

“I ran my first half marathon with her and raised £1,500 for charity, it felt fantastic.”

So far, Rupert has raised over £600 for the VIP Treatment appeal which supports children and young people with cancer at the hospital.

His inspiration behind the VIP Treatment appeal comes from a bereavement project he led at the school he works at. Rupert created The Peace Garden for bereaved students and in memory of three students at the school. One of the students passed away shortly after Rupert received the diagnosis and prognosis of Sharon and is the main inspiration behind his half marathon challenge.

Rupert said: “I took four school friends to visit him at home when we knew his time left with us was limited. One of them got very upset and his response was to smile, laugh and to enjoy the time they have together now. This is why I run for him.”

Thanks to the students that Rupert has helped at school, they nominated him for an award for The Peace Garden and he won the title of ‘Inspirational Adult’ at the Dudley Youth Awards.

To support Rupert in his incredible challenge, you can donate to his JustGiving page here.

To find out more about the VIP Treatment appeal, please click here.