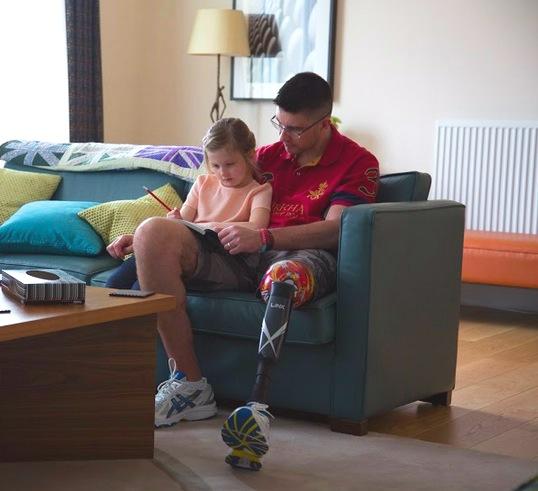 It was 2013 when Lancashire-born Staff Sergeant Stuart ‘Archie’ Gemmell was deployed into Forward Operating Base Wishtan, Helmand. The Royal Engineer and his team had been assigned the dangerous but necessary job of clearing the maze of homemade bombs that surrounded the area.

Soon, he came across a wall, a flight of steps chiselled into the stone. Knowing that it would be an advantage to get to higher ground, providing a more aerial view of his surroundings, he started to climb. His ascent had barely begun when the steps suddenly gave way and he lost his footing, stepping heavily backwards in an attempt to regain balance. His left foot landed inside a clay bread oven – and for a moment after he fell, everything was still.

After nothing happened, Stuart tried to push himself back up, and it was then that an abrupt and deafening explosion ripped through the air. The next thing he knew he was on his back, the air thick with dust.

As he lay waiting for the dirt to settle, he didn’t feel any pain, but had a strange yet certain feeling that something had gone badly wrong. It was then that he heard a familiar voice, someone calling him by his nickname, cut through the confusion: “Archie, keep still. You’ve lost your leg.”

Stuart was flown to the Queen Elizabeth Hospital Birmingham, which is the receiving hospital for all UK military patients who are injured or fall ill anywhere in the world. He spent eight weeks there recovering from his injuries, having lost one leg and sustained substantial trauma to the other leg, his buttocks and arms.

Stuart continues to return to the hospital for the ongoing treatment and operations he requires. His wife Kelly and their daughters are able to come and stay at Fisher House while Stuart is being treated. Kelly said: “Fisher House was a godsend for me and my girls. We were able to visit Stuart every day and we had somewhere that we could call home for the eight weeks that he was being treated. We stay at Fisher House whenever Stuart comes back for treatment.

“You see on the news, and you know that it could happen to you, but you never think that it will happen to you. Never.

“One of the first questions that people ask when they find out about our situation is: ‘Were you well looked after?’

“We were cushioned – that’s what it felt like – someone just put us in a big bubble and just protected us. My bad memories stay in the hospital. As great as the hospital and the staff are – that’s the upsetting place for me. I don’t associate bad memories of that time with Fisher House, only good.”