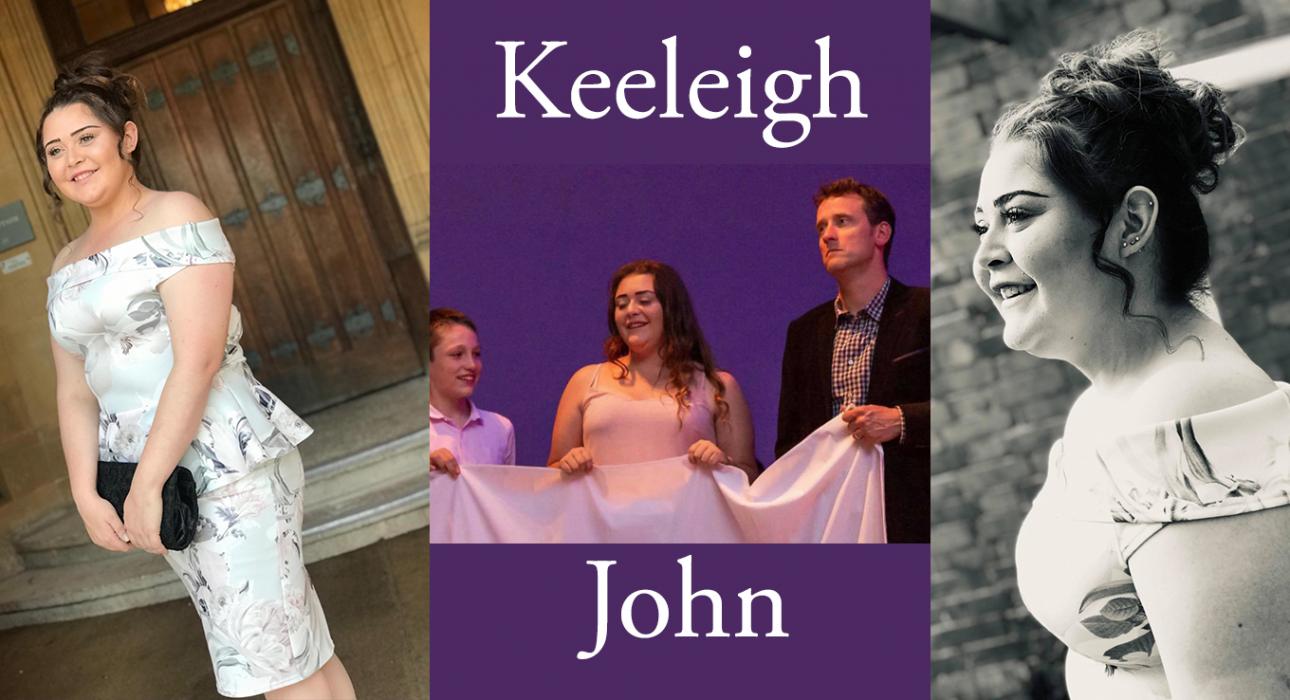 Keeleigh John’s transplant story began shortly after she was born, in September 1998. Keeleigh’s mum noticed that her stomach was swollen, and eventually Keeleigh was taken to A&E, as the antibiotics that she had been prescribed did not reduce the swelling.

The doctors decided to perform an ultrasound scan on Keeleigh, and her mum had an anxious wait for the results. Keeleigh said: “My mum had no idea what she was about to be told. The doctors told her ‘I’m sorry Mrs John but it’s not good news, your daughter needs urgent medical care.’”

Keeleigh was taken by air ambulance to Birmingham Children’s Hospital, where she was placed in intensive care. But the doctors were unable to agree on a diagnosis. After extensive tests and a long night of waiting for Keeleigh’s mum, the doctors diagnosed Keeleigh with autosomal recessive polycystic kidney disease, congenital hepatic fibrosis and proxysismore dystonia.

All of this meant that Keeleigh’s kidneys and liver were failing. Keeleigh’s body was running with just 24% kidney function and 41% liver function, and doctors hoped to control her condition through medication.

Initially this worked, but Keeleigh’s family were warned that this would not last forever, and that one day she would need a kidney and liver transplant.

Keeleigh said: “Years went by and I lived my life the same as everyone else. However, in March 2011 I was admitted to hospital to undergo dental surgery to remove one tooth. I had some routine blood tests before the surgery and they found that I now only had 11% kidney function and 22% liver function.”

At this point, the doctors decided that it was time for Keeleigh to begin the road towards transplantation. In May 2011 Keeleigh was admitted to hospital for a transplant assessment the make sure that she was well enough to receive a transplant.

Later that month, Keeleigh went onto the multi-organ transplant list. Keeleigh said: “I was told that the waiting time could be anything from days to years, and there was no way of knowing when the call would come.”

The waiting game began for Keeleigh. In July 2011 she was told that she only had six months to live if she did not have a transplant. She said: “Throughout the next few months I tried my best to enjoy every day, but the tiredness and pain would often get the better of me.

“December came and I still hadn’t received my transplant, time was quickly disappearing.” Time was running out for Keeleigh but incredibly the call came to say that the organs that she was so desperate for were available.

She said: “We travelled to Birmingham and everything went so quickly from there. I went down to theatre the next morning and spent nine days in intensive care on life support.”

After just under three weeks, Keeleigh was discharged from hospital, defying all the odds after receiving a multiple organ transplant.

Keeleigh said: “The recovery took a long time and I had new struggles each day to overcome, but step by step I got there. Since I had my transplant life has been amazing and I’m living every second of it to the best of my ability.

“There have been a few hospital admissions, infections and two bouts of rejection, but things are returning to normal and beginning to become stable again.

“I am forever grateful to both my donor and my donor family for making a selfless decision that meant I was able to live. My donor really is my hero.”