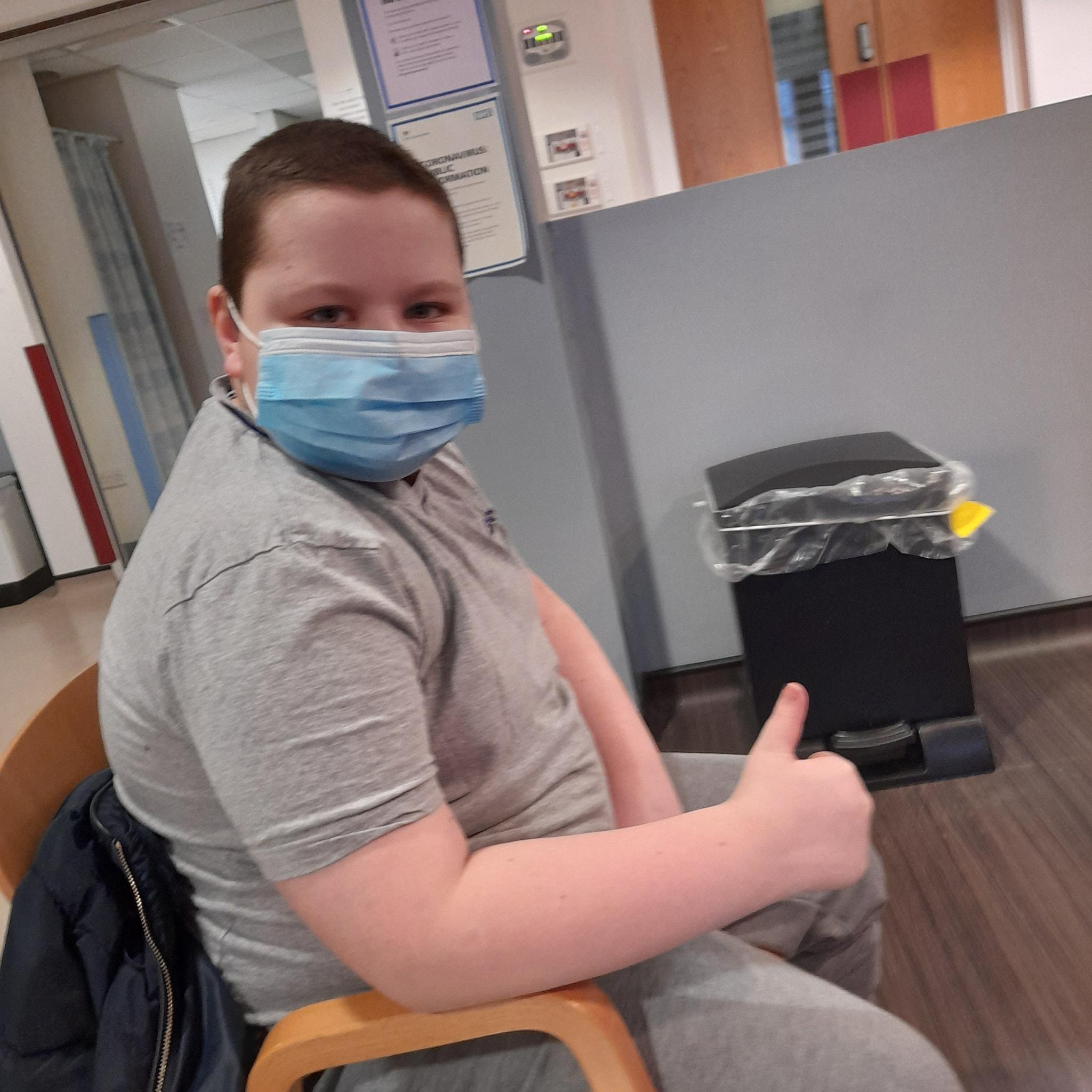 In June 2020 12-year-old Dennis Morgan, from mid-Wales, was diagnosed with stage four Hodgkin’s lymphoma. This devastating diagnosis turned his family’s lives upside down, and he urgently started a course of cancer treatment, initially at Telford Hospital, and then at the Queen Elizabeth Hospital Birmingham (QEHB).

Just eight months after his diagnosis, Dennis has made a fantastic recovery, and his family have reflected on the support that they received during his treatment, and their stay at University Hospitals Birmingham (UHB) Charity’s Home from Home.

On 8 June, Dennis received a blood test, and by the next day he was in Telford Hospital for further tests. Amanda said: “It was horrendous; our lives were turned upside down overnight.”

Dennis’ condition deteriorated and he was transferred to the Queen Elizabeth Hospital Birmingham. Here he received a chest drain to remove the fluid that had built up on his lungs, and a biopsy on his lymph nodes.

By 16 June, just eight days after his first blood test, Dennis received the diagnosis of stage four Hodgkin’s lymphoma. He began chemotherapy at QEHB, before receiving the rest of his chemotherapy treatment at Telford Hospital, which carried on until November.

Dennis has cerebral palsy and has reduced mobility, which was worsened by the gruelling chemotherapy treatment. This was a difficult time for Dennis and his family, and the pandemic made things even more complex.

By January 2021, Dennis was due to begin radiotherapy at the Queen Elizabeth Hospital Birmingham, under the specialist care of Paediatric Therapy Radiographer, Liam Herbert. Dennis and Amanda visited the hospital for an appointment before Dennis started his treatment, and it was at this point that Liam told them about UHB Charity’s Home from Home accommodation.

UHB Charity provides free accommodation, just a five minute walk from the hospital, for young cancer patients and their families. Dennis, Amanda, and his dad Guy, were all able to stay at the Home from Home during his radiotherapy treatment.

Watch Dennis giving a tour of the flat on Facebook. Don't worry - we got the internet fixed for Dennis later that day

Amanda said: “Dennis is autistic, and so for him the prospect of staying somewhere unfamiliar was worrying. Liam took us on a tour of the flat during one of Dennis’ appointments before he started treatment, which immediately put his mind at ease.

“The flat is beautiful, we felt so at home there right from the start, and it was great that he had his own bedroom so that he could spend time on his own, on his computer.

“We thought that, due to Covid-19, we would have to drive to the hospital and back each day for his treatment, this would have been a four-hour round trip which would have had a huge physical and financial cost for us as a family.”

Dennis’ radiotherapy treatment was successful, and just eight months on from his diagnosis he is lookingforward to the future.

Amanda said: “His mobility is still slightly reduced but we’re working with the occupational therapist to get that back. He hopes to start school again eventually and things are looking much better for him.

“We are so grateful to the donors and fundraisers who made the Home from Home possible. It was a wonderful lifeline for us whilst Dennis was receiving his treatment, and I cannot imagine what that period of time would have been like without it.

“We come from a small village in mid-Wales, and the support that we have received from the community has been incredible. We set up a Team Dennis Facebook page to keep people up to date with his treatment, and Dennis enjoyed showing his friends around the flat over Facebook, and we all enjoyed the benefits of being in a big city, such as the choice of takeaways!”

Tom Joyce, Operations Manager at UHB Charity, said: “Everyone at UHB Charity is delighted that Dennis’ treatment was such a success. Our Home from Home provides a wonderful service to families like Dennis’, and we are delighted to hear that their time at the Home was so positive.

“None of this would be possible without the support of our donors, and with your continued support we will be able to offer free accommodation to more patients and families across our Trust.”

Find out more about UHB Charity’s Home from Home appeal, and make a donation, here.