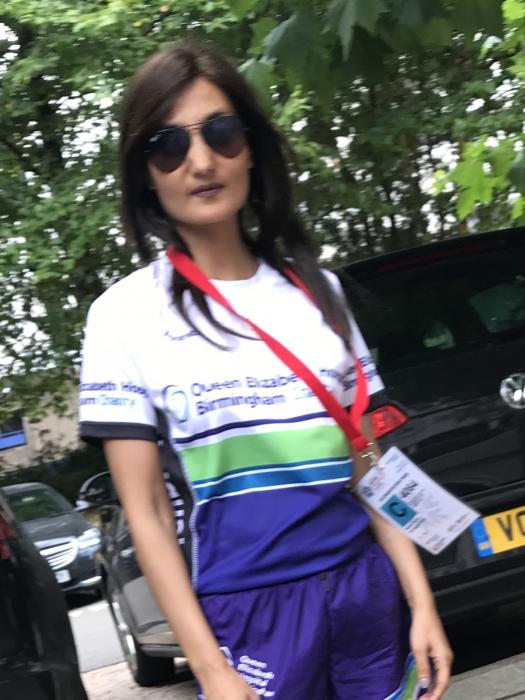 The Birmingham Adult Transplant Sport Team is represented by many amazing people who have received life-saving transplants at the Queen Elizabeth Hospital Birmingham.

One such person is Saddia Karim, who received a kidney transplant in 2016, and has since gone on to compete in the Transplant Games in Birmingham in 2018.

Saddia’s transplant story began back in 2003 when, aged 23, she moved from London to Birmingham. She went for a medical check-up and was diagnosed with kidney failure, despite not previously having any symptoms.

Saddia said: “I had always been active and sociable, enjoying travelling, going out and playing sports. But as my condition deteriorated I couldn’t do a lot of the things that I loved. I spent pretty much all my time in and out of hospital.”

Due to the severity of her condition, Saddia was added to the transplant list and received a kidney from deceased donor in 2007. Sadly, there were a lot of problems from the start and the kidney began to fail. Saddia said: “I am still grateful that I had the transplant in 2007, despite the fact that the kidney eventually failed and I had to start peritoneal dialysis.”

Peritoneal dialysis (PD) involves a catheter being inserted into the stomach, and spending up to nine hours at a time hooked up to a special machine that removes fluid from the stomach.

Saddia said: “Starting PD was a big shock to the system. Trying to adjust my life around the dialysis was hard, but I had to remember that it was keeping me alive and functioning.”

Saddia’s donated kidney was eventually removed due to ongoing problems, and she had to start temporary haemodialysis, which was a hard time for her and her family.

Some months after this, Saddia got the call to say that the transplant team had found a matching kidney for her, again from a deceased donor. The team were nearly ready to proceed with the operation, but at the last moment blood tests revealed that Saddia’s body was producing antibodies meaning that the operation couldn’t go ahead.

“This was devastating” Sadia explained, “I can’t express the pain I was feeling and I shut myself off from everyone.”

After this, the transplant coordinator spoke to Saddia’s brother and told him about the pair exchange programme which allows patients who have a willing but incompatible, healthy donor, to receive a kidney.

Saddia’s brother agreed to sign up for the programme without hesitation, and in October 2016 a match was found and the three-way exchange was arranged.

The following month, the operation went ahead and was a great success. Saddia said: “My family and my husband are my biggest support, without them I would not have got through everything. My mum and dad have been with me no matter what, and my family have dropped everything to be there for me.

“My husband has been my rock; he never let me give up and always picked me up when I was down. My brother never gave up; he gave me the chance to have a transplant. I can never thank my brother and my donor enough for the amazing gift that they have given me.”

Throughout this time Saddia continued to work full-time but expressed how tricky it was to balance her dialysis with her work. She said: “I love working, it’s the only thing I felt I had control over, as with my failing health I felt that I had lost all control. My colleagues and manager have always been amazing, and have accommodated my needs.”

In 2018, Saddia decided to do something new and joined the Birmingham Adult Transplant Sport team, taking part in the Transplant Games in Birmingham. She said: “It was such an amazing experience; I met so many inspirational people and have travelled far and wide with the team. This is something I never thought I could do.”

Saddia took part in the 3km walk at the 2018 Games and is looking forward to taking part in future games. Speaking of the difference that her transplant has made to her, Saddia said, “Since my transplant my life has totally changed and I’m cherishing every moment.

“My aim is to raise awareness of organ transplant, and getting people to sign up for organ donation from within the BAME Community.”

Saddia has raised a phenomenal £1,610 for the Birmingham Adult Transplant Sports Team through QEHB Charity.

If you would like to join the Birmingham Adult Transplant Sports team, you can find out more here.