Gemma Jolly has received a life-saving liver transplant at the Queen Elizabeth Hospital Birmingham thanks to a new machine which has been funded through charitable donations.

The OrganOx machine helps to clean a donated liver ready for transplantation, increasing the chances of the recipient’s body accepting the new liver, and increasing the number of organs that will be considered for transplant. This incredible piece of equipment came to QEHB thanks to the Ann Fox Foundation who raise money in memory of Ann who passed away following a liver transplant.

Gemma was diagnosed with auto-immune hepatitis in 1997, and following the birth of her children George and Harrison in 2001 and 2006 her liver began to fail. Gemma said: “The doctors tried all sorts of medication and tablets, but they just couldn’t get in under control.”

After being transferred to the care of QEHB in 2004, the doctors realised that her liver was being eaten away, and she became progressively more ill.

In 2015, Gemma was admitted to intensive care and doctors told her to fear the worst. Gemma’s husband Mike said: I was advised to tell our boys that she wasn’t going to make it. That was the worst thing I’ve had to do as a dad.”

Gemma was put on the transplant list and received her first liver transplant in May 2016. She said: “I was in and out of hospital for eight months before, spending more time at hospital than at home. This was really hard for the boys, they found it really difficult.

“I had my transplant, which was initially a success, but after six months or so things started to go wrong.”

Mike said: “I noticed that her eyes were jaundiced and she was admitted for tests and the doctors said that the only way forward was to have another transplant.”

Gemma was added to the waiting list once again, however things got steadily worse for her, and her liver failed completely. Speaking of what it feels like to have a failing liver, Gemma said: “It makes you feel really tired and lethargic, you don’t want to do anything. I was working in an infant school with children with special educational needs. Sadly I lost my job due to budget cuts and so I began working in Tesco. My colleagues at Tesco have been amazing throughout my illness.”

Gemma continued to live with her condition, but was unable to live the life that she had become accustomed to. Then, in October 2018, Gemma was admitted to hospital with severe jaundice.

She said: “Mr Thamara Perera came to visit me on the ward and he asked whether I’d be interested in signing up for a process whereby I would have a transplant using a brand new piece of equipment at the hospital. It was a no-brainer for me, Mr Perera carried out my first transplant and he explained it really well.

Mike said: “We had actually seen Mr Perera on TV as part of the Surgeons programme on BBC Two where he was explaining the new machine, and how it works to keep livers in good condition before they’re transplanted.”

Gemma continued: “Mr Perera explained about Ann Fox’s family and told us about their fundraising that had made it possible for the machine to come to the hospital.”

Despite the presence of the machine, Gemma was still in need of a suitable organ. Then, on 7 November 2018 a liver was found.

“It’s a mixture of emotions” Gemma said, “It’s hard to get your head around the fact that someone has got to go through loss so that you can have something from it. This is difficult to process.”

“Before I went into surgery, Mr Perera told me that if it weren’t for the machine then I wouldn’t have been able to have that liver as it took a long time to come over, and by looking at it they wouldn’t have considered it suitable.”

Gemma’s new liver was placed inside the OrganOx machine where it was then cleaned, and the fatty deposits were washed away, ready for it to be transplanted. This process can take up to four hours, but in Gemma’s case it was ready within forty minutes.

Mike said: “Mr Perera told us that it was a beautiful liver. This was such a relief to hear. We got the call at 6am to say that they had a liver for Gemma, but the surgery wasn’t until 7:30 that night.”

Gemma’s surgery was a great success and she was up out of bed and sitting in her chair within two hours of waking up. She said: “It’s hard to explain but I feel totally different. I feel ready to get up and go. I want to get back into teaching, I miss the kids and I miss the challenges.

“It’s good to be able to plan for the future again, life goes on hold when you’re unwell. We’re starting to plan a nice holiday abroad with the boys, they deserve it after everything they’ve been through.”

Mike, who works as a night time manager and route planner working 12 hour night shifts five days per week, said: “It’s been a big part of our married life, we got married in 2001 and she had it then. It’s been a challenge for the whole family, thankfully we’ve had lots of people looking out for us, especially my colleagues who have been amazing and helped us look after the kids.”

Reflecting on her experience at QEHB, Gemma said: “The hospital is fantastic, I couldn’t speak highly enough of them, the staff have been absolutely brilliant. It blows you away what they can do, we’re so grateful.”

Mike said: “We’re both incredibly grateful for the fundraising that allowed Gem to have an operation that she otherwise wouldn’t have had.”

Gemma added: “From the bottom of our hearts, we thank you. I’ve got my life back, and my boys have got their mum back.”

Justine Davy, Head of Fundraising at UHB Charity, said: “Gemma’s story is an incredibly moving one, I’m so glad that she now has the liver that she so desperately needed and that her life can now get back to normal.

“We are incredibly proud to have been able to provide this amazing equipment that is already saving lives at the hospital. The Ann Fox Foundation has been instrumental in raising the money needed to purchase the equipment. It is wonderful that the family of a liver transplant patient, who sadly didn’t make it, have been able to gift Gemma and her family with the gift of life.”

To find out more about how UHB Charity supports liver patients at the hospital please visit hospitalcharity.org/liverfoundationuk 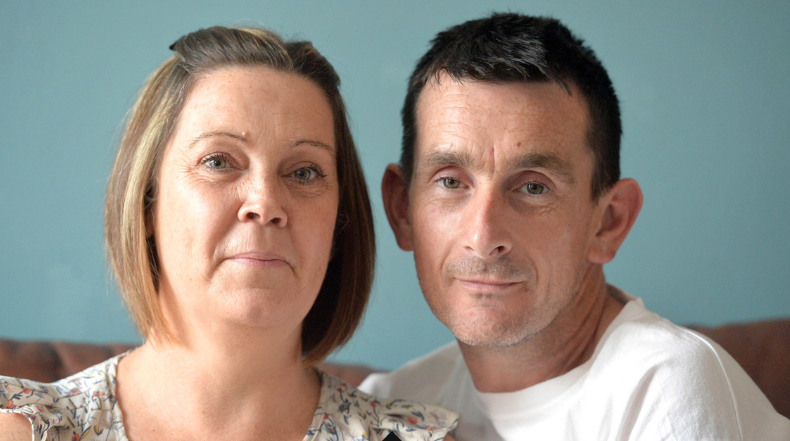 2005 was a year that would permanently change Keith Murphy’s life; he was diagnosed with hepatitis.

After being transferred to have his treatment at the Queen Elizabeth Hospital Birmingham, Keith, from Runcorn, was managing so well that his appointments dropped from every three months to every six.

However, in June 2015 a lesion was spotted on Keith’s liver during a routine ultrasound. This was investigated further through an MRI scan in July; this led to the confirmation that Keith had liver cancer.

Keith’s best option to help ensure a full recovery is to have a liver transplant, for which he is currently waiting. He is using his positivity and sparkling sense of humour to see him through this period with the support of family, friends, and partner Andrew.

After living with his partner Andrew for nearly 20 years, the couple decided to marry, and wed on Saturday 21 November, at a wonderful ceremony which included a Gary Barlow tribute act and matching pairs of red patent leather shoes!

Despite their hectic wedding plans, Keith and Andrew have also been busy fundraising for UHB Charity’s Liver Foundation UK, and have raised an incredible grand total £3,918 for the Liver Foundation.

Justine Davy, Head of Fundraising at UHB Charity, said: “We are so pleased to have heard all about the wonderful wedding day that Keith and Andrew experienced.

"Their selfless fundraising – where they asked for donations in lieu of wedding presents – has been immensely humbling. For a couple to look to the needs of others while going through severe health issues of their own is amazing, and on behalf of the Liver Foundation I want to wish Keith and Andrew the very best for the future.”

Further to Keith and Andrew’s wonderful wedding, just a fortnight later, on Thursday 3 December, Keith received his liver transplant. He has been discharged from hospital and is now doing well at home. UHB Charity wishes Keith a speedy recovery. 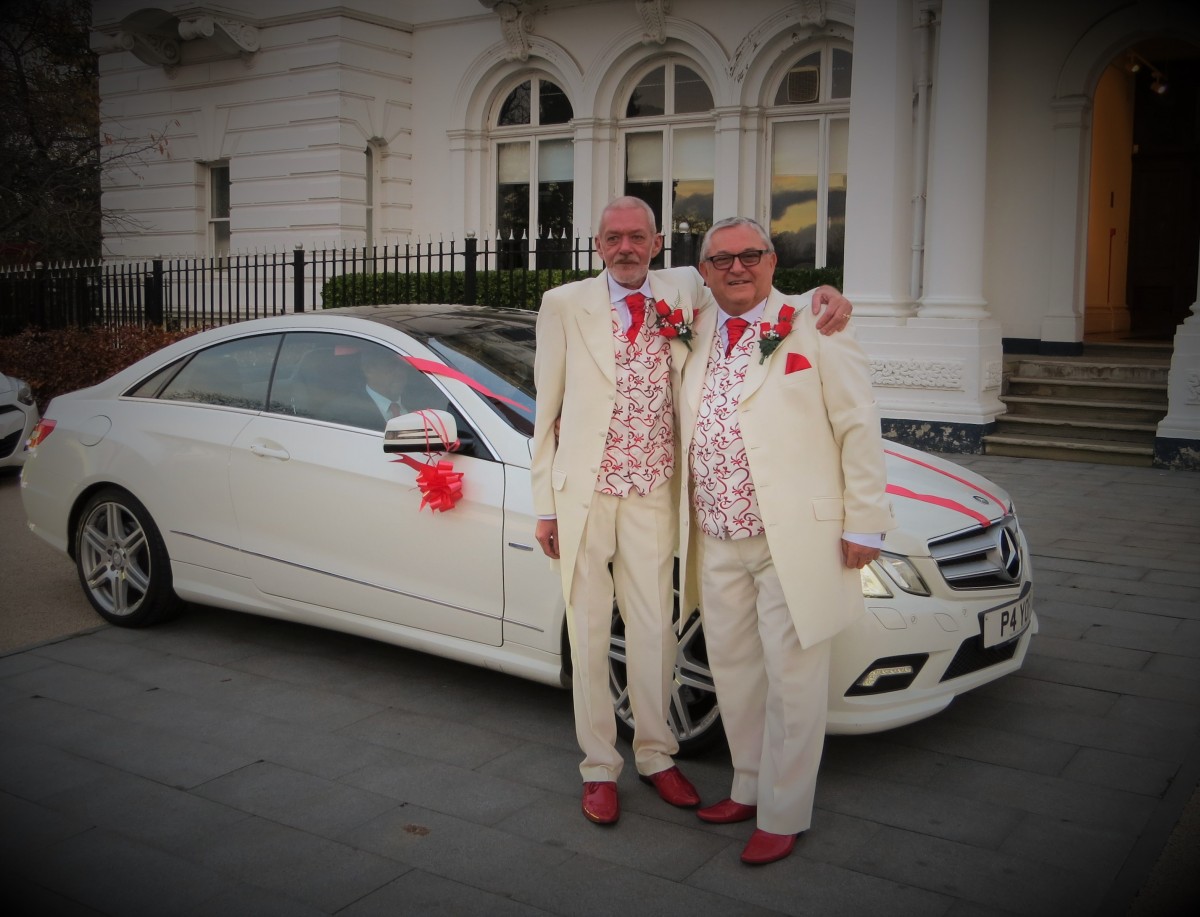 To donate to support liver patients like Keith and Gemma, please click the 'donate to this fund' button at the top of this page.